Why I like the separation of academic departments and colleges

One of the best things for creative scholarship is to feel you are in the company of others also striving for understanding and clarity. That company is often best if it is quiet, even dead. This is because we need time alone to puzzle things out. Then we need time together to try out our solutions on others. The dead ones don’t help much with this second stage, but they contribute to the atmosphere, especially here, in Oxford. 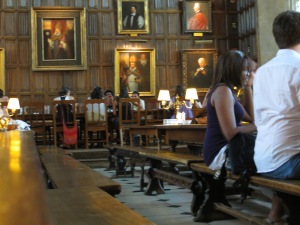 Oxford must be one of the best places in the world for idea generation. It might not seem so now in this third week of July, when it has finally become hot and sunny. The weather suits the masses of apparently unthinking foreign teenagers that throng the commercial streets. But I like the sere inner courtyards of the ancient colleges, where the sunny weather seems to be an aberration from chilly, rainy normalcy. I like the simple stone lines of the buildings. 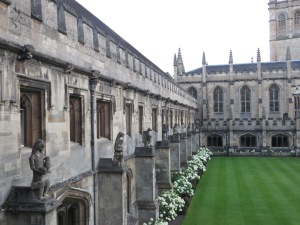 I like the encrusted gargoyles and the towers. Cloisters, churches, and high tables, old and sticky, define these private places where many before us worked out their own versions of the world. 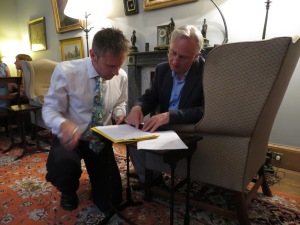 After dinner in the New College living room, with Stuart West and Richard Dawkins, both exceptionally clear thinkers and writers.

A short visit like this won’t really let us understand the complex relationship between the colleges and the departments, but I think multiple academic homes might also be good for creativity. They might even be good for happiness, which I am aware is not always the best friend of intellectual innovation. But who would not want both happiness and creativity? The reason I say they might be good for happiness is that if things are troubled in one sphere, the other can provide an outlet. If there is linear hierarchy at one place, the people and ranks will be different at the other. Of course there aren’t clear hierarchies most of the time, but we still have a sense of them. So, it is probably a good thing that most of the colleges here are not tied to specific disciplines too tightly.

At Rice University we had departments and colleges also. The colleges were not nearly so old as these. Our interactions with undergraduates were more casual, lacking specific tutorials. But they gave us a chance for out-of-class interactions. They gave us groups of friends outside of our departments. They gave us a chance to get to know both students and faculty across campus. They gave depth. I have not found anything similar yet at Wash U, though the department and the graduate programs are somewhat separate. I think it is important to find ways to cross experiences on a regular basis. Here it is easy. But can it account for the remarkably clear thinking on social evolution of my Oxford colleagues?