Can a big group write a good paper?

This week I’m at the National Evolutionary Synthesis Center at a Catalysis meeting on the Evolutionary Origins of Multicellularity. There are 28 people on the list. NESCent is the more recent Evolution match of Ecology’s NCEAS. We will spend the week forging ties across the spectrum of people that work on topics relevant to multicellularity. So far I’ve heard a fascinating talk by Nick Butterfield on the fossil origins of multicellularity and met a lot of people, new and old. 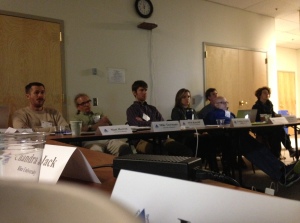 But should we all get together and write a paper on multicellularity? Can we figure out something to say that everyone will actually contribute to substantively enough to be authors? I’ve been involved in some other things like this and have found it to be true all too often that a small minority of the group actually does the heavy lifting involved in carving out a paper, let alone an important paper.

There are also big groups that end up writing papers based on journal clubs, or seminars. Everyone wants a paper and somehow one comes out. I think this can work if there is a topic for something like a meta analysis and each student or small group of students contributes the research on some specific taxon. But it is still challenging.

I’m not against studies that involve a lot of authors. Some projects I’ve been on have many authors, but they tend to be divided among different areas, with a small group of chemists contributing chemistry, another group contributing phylogenetics, another something else. Genomic papers are especially likely to be like this as different groups look at their favorite gene families in the context of a new genome.

Can a big group that just met really write a good paper? I’m guessing we would be much better at writing a set of papers in smaller groups, or that some groups would write papers and others not. After all, we don’t always write papers even after really good and influential meetings. So even if we learn a lot about what we think about multicellularity, it has to be new and important before we publish on it. And every author needs to contribute substantively in more ways than just being in the room.

1 Response to Can a big group write a good paper?