What you really need instead of an elevator pitch 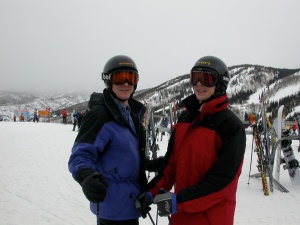 The chairlift might be a time to talk about your science!

I bet you’re feeling a little guilty whenever someone asks you if you have an elevator pitch, you know, those 30 second or 1 minute talks about what you do that can be given in the time it takes to go up from the first to the fifth floor. You don’t really have one. If you do, you probably worry that it sucks. You know not to be too technical, that if you had taken a course from Alan Alda on improv, you would be much better.

So maybe you feel a little relief when I tell you that really you don’t need an elevator pitch and there is a good reason you don’t have one. Even improv champs like Alan Alda or Aniek Ivens might agree with my following reasoning. First, consider the elevator ride. Actually, people generally do not talk to each other in elevators, even at scientific meetings. So, it is not going to be an elevator pitch, because you are not going to blurt out 5 sentences to strangers and in any way communicate science.

When might you actually have a chance to have only a few minutes to explain your science? The most plausible scene I can think of is in a group where you know some but not all the people. So there is already a bit of a comfort level since you have friends in common. The stranger next to you turns to you and asks “What do you do?” or “What do you work on?” At this point I think I would use one of these five sentences. 1. I am an evolutionary biologist. 2. I work on social behavior in microbes. 3. I study the evolution of symbiosis in a social amoeba called Dictyostelium. 4. I am at Washington University in St. Louis. 5. I teach behavioral ecology and undergraduate research perspectives. Just one of those, no more. I would pick which one depending on the audience.

The next sentence I would say would be to ask the questioner what she does. However she answers, I would ask a follow-up question. I would try to turn the conversation to what she does. This gives me several advantages. First, I get to learn something new. Second, if the conversation does get back to what I do, she is much more likely to listen. Third, she will have an overall positive opinion of me because I am interested in her work.

But what if she never does ask me what I do? Have I lost an opportunity? No, for two reasons. First, if she really doesn’t care what you do, forcing it on her won’t help. Second, by letting her go first, you can figure out which of your many cool stories will most interest her, and tell that one. You should never spend much time on an overview of your work. Do that with a sentence and then turn to one cool story.

So there you have it. Conversation is a dialogue. Turn the conversation to the other person and you will learn something and have a more willing listener should it come around to you. And then tell one story, chosen to fit best with this particular listener. Have fun!