Measuring the success of a scientific meeting 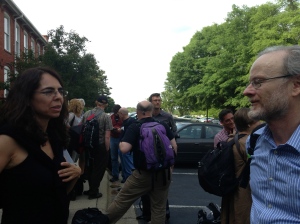 The success of a scientific meeting is something we care about, but measuring it may be complicated. One might think the best measure involves whether or not the stated goals were accomplished. These goals could be as simple as having a certain number of attendees. If it is a workshop, the goal might be actual papers, or grant proposals. It could be a white paper delivered to a funding agency. But I have a different, more personal measure of satisfaction at a meeting.

From the beginning of the multicellularity meeting I heard talks that entranced. The fossil talks in particular were amazing to me. It isn’t that this isn’t well known in certain circles, but that they weren’t my circles. I loved the early stuff on the first fossil evidence for multicellularity. I loved the fossilized developmental series. I puzzled over the idea that animals changed the earth. I know plants changed the very make up of our atmosphere and I want to think more about that. What is the role of animal ability to move water? Why was the speaker so excited by sponges? One of the truths about effective meetings is that the talks are just the beginning. I then go home and read papers I never would have thought of looking for.

At a successful meeting one thing leads to another. For me, the fossil stuff led to wondering about how important multicellularity really is in ways we may pursue.  I found a little factoid that there is more biomass in Antarctic krill than in humans, all concentrated in an area two times that of the US. No wonder there are all those whales and squid that eat them. But humans and krill are both multicellular organisms, making them essentially the same. Where is life surface-bound and where is it floating or moving actively? Is surface-bound life generally multicellular, like aspens or bryozoans or a gooey mess like a biofilm? I bought a book on bryozoans. Do they have the answer? Or should I work harder to understand adhesion genes? Well, this is just a sampling of the things I started thinking about. I bet others found other arenas of excitement.

You are less likely to learn totally new things from scientists you already know, or those from your same intellectual ghetto. It is therefore up to the organizers to put together a good mix. In this case they were Mike Travisano, Matt Herron, and Will Ratcliff. They put together a good mix in specialty, age, and gender. About a third of the participants were women, a mixture approximating that in the field. Fossils, microbes, protists, social insects, colonial animals, fungi, and algae made their intellectual appearance. The group was light on mechanisms, I suppose, but you can’t do everything.

We were tasked with planning out the paper that would define and explain multicellularity and point to future research directions. To do this we had alternating sessions of talks, small groups, and large groups. The small groups self-organized from lists of questions gathered into five groups, four of which attracted participants. Some people joined groups where they knew a lot, while others joined groups that were novel for them. We had a Wiki for posting articles of interest and Google Docs to simultaneously write our pieces.

There was a certain amount of stress for the organizers, because we did not always follow instructions. We were asked to join different groups if we from the same lab group, but Dave and I stayed together.  Some groups changed their topics. Some seemed to get stuck on things that made their presentations rather inscrutable. Is trying to put together thinking on a topic in a small group is an effective way of spending several days, whether or not a paper comes out of it.

I think it worked. For me, discussing with Letitia Avilés, Mike Travisano, David Queller, and briefly Daniel McShea, was more effective in letting me see things differently than just listening to a few days of talks would have been. What is important when we think about multicellularity? What is not? How are social insects alike and how are they different? Why have levels of coloniality progressed comparatively little?

I also liked the informal get-togethers a lot. I loved seeing my former grad student, Chandra Jack. We nearly finished another draft of a paper. I liked the energy and diversity of the young post-docs.

What would I have changed? I would have liked to have a 10-minute talk from everyone at the meeting. These could be dispersed throughout the first three days, perhaps first thing in the morning and right after lunch. I would have liked less time for the overall presentations because they were often unclear to people outside their group. Well, they were unclear to me.

Did we come up with something new? Will there be a group paper? I think there were enough new ideas and old ideas brought together in new ways from the corners of the field that there easily could be. But it will take a lot more work.

The next meeting I go to is the symposium for Alan Templeton at Washington University in St. Louis on 3 June 2013. It will have a mix of talks, posters, and socializing. I hope people discover new directions while celebrating Alan’s phenomenal career, one that won’t end just because he is retiring.

1 Response to Measuring the success of a scientific meeting